Mid-19th Century Green And Gilt, Carved Thermometer Over Barometer, Circa 1850

From the end of the 18th century, the domestic barometer became one of the ‘must-haves’, a thing of science, function and beauty to complement the decor and furnishings and, no doubt, to impress the neighbors. Cases began to reflect the prevailing decorative arts fashions, the most popular of which was the “banjo” barometer. Wheel barometers produced in the mid 18th-19th centuries are works of art by very fine clockmakers of the period. Foil sticker on the back: “M. Gizardin 8 Rue Des Sts Pères Paris VII”. The decorative scientific instrument was originally purchased in the 1960’s at a Paris dealer, M.Gizardin (d. 1976) who was a French actor of some note and later, an antiques dealer at 8 Rue des Saints-Pères. 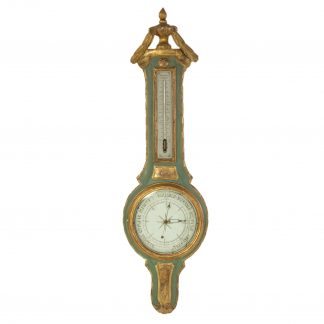 You're viewing: Mid-19th Century Green And Gilt, Carved Thermometer Over Barometer, Circa 1850 $2,500
Add to cart
%d bloggers like this: