Ochre Painted linen and cork British naval artillery bucket with worn painted crest and a leather strap, English circa 1880; also called a cordite bucket or a Clarkson’s Case. 1 2 3 The body is made out of cork covered with a canvas or linen. Cork is lightweight and naturally fire resistant, well-suited for safely storing combustible charges. Painted linen is used to cover & finish the cork. and a weathered stenciled amorial crest. Decorative amorial crests were most likely added later after these buckets were decommissioned and sold as umbrella stands or waste baskets. The sewn handles and straps are fixed to the body with copper rivets. 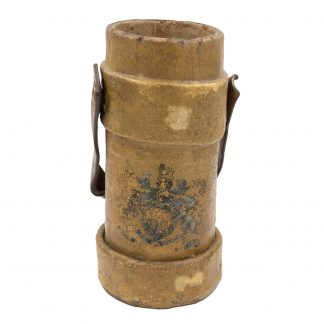 You're viewing: Ochre Painted Linen and Cork British Naval Cordite Bucket With Painted Crest and Leather Strap, English circa 1880 $1,200
Add to cart
%d bloggers like this: