The origins of the “trophy” go back to Greek and Roman celebrations of military victories, where the military arms of the defeated enemy were hung from oak trees. Beginning in the 1700s, trophy motifs with such themes as music, hunting, theatre, or the seasons became very popular in France. These themes, originally intended for interior and exterior architectural decoration, eventually spread to textiles, embroidery, and marquetry

These panels are part of a larger private collection acquired by a local San Francisco Bay Area family throughout a lifetime of world travel and personal connoisseurship. The panels were purchased from the exclusive Paris interior design firm, Maison Jensen, at their legendary 9 rue Royale headquarters in the 1960’s. With original correspondence, marketing, photos / tear sheets from Maison Jansen along with a packet of their companion panels.

Sold as a pair. 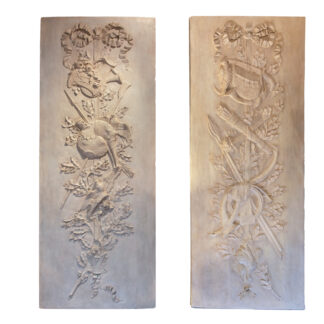