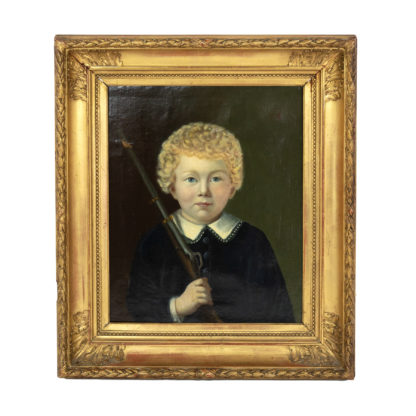 Portrait of a boy, Dutch, circa 1840, unsigned; A very serious looking boy with a pile of blond curls on his head holding a rifle. [1. It was during the European Renaissance that the concept of childhood began to emerge. Rather than being seen as 'incomplete' or 'unfinished' adults as they had previously, children were viewed as individual beings in need of protection and nurturing, and their learning was the responsibility of the adults around them. During the Enlightenment in the 18th Century, the Swiss-born philosopher Jean-Jacques Rousseau argued that children should be considered as autonomous beings, and at this time, artists began to treat boys and girls as individuals.

The dawn of the capitalist era generated a large moneymaking middle class, often in the Protestant sea-trading countries such as Britain and the Dutch Republic. These new family types had an ideology centered on bringing up their children well. They had knowledge and had gained wealth - two things their offspring could inherit. Along with this rise of the bourgeoisie it suddenly it became fashionable to commission group family portraits characterized by tender relationships between parents and children.

By the 19th Century, children were commonplace in art as reflected by a burgeoning interest within Western societies in children's rights.
] [2. How childhood came to fascinate artist, Alastair Sooke, April 1, 2016, bbc, http://www.bbc.com/culture/story/20160315-how-childhood-came-to-fascinate-artists ]
[3. Children in Art, National Galleries Scotland, https://www.nationalgalleries.org/art-and-artists/features/children-art ] height: 25in. 63.5 cm., width: 21.5 in. 54.5 cm.